Playing Trains was an interactive exhibition about childhood fascination with trains, at the National Railway Museum in summer 2015. It was aimed at a family audience, particularly those with preschool children. The Museum already had a dedicated playspace for this age group, but this was the first time that they had generated an interactive exhibition for this age group, so they were keen to evaluate the experience. 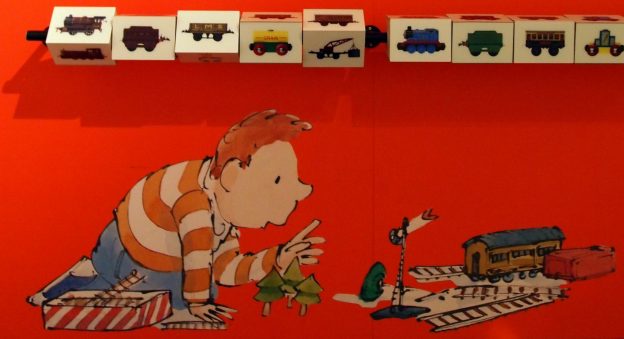 One of the interactive elements in the exhibition.

I conducted three days of fieldwork at the National Railway Museum during the school summer holidays.  Observation and photography was used to gather first-hand evidence about family interaction with the exhibition and to capture the young children’s responses. Structured interviews were conducted with groups ranging from a single adult and child, to larger families, the biggest of which included four adults (grandparents and two mums) with five children. Children were given the opportunity to draw during the interview if they wished, and this was a useful prompt to talk about the things which the children had seen during their visit.

The primary audience for the report was the internal Exhibitions Team at NRM, with the expectation that it would also be shared with senior managers across the organisation, and external partners involved in the Gallery.