The creative heritage project was part of the Objective 1 Funded regeneration of the area of multiple deprivation and was managed by Eventus, a social enterprise. We created 2 public sculptures celebrating the past, present and future of the village. I effectively organised 50 creative workshops with 3 artists in 10 venues over 2 months with 30 groups. We held events wherever we could find people including the Social Club Bingo nights, spray painting at the youth club and stone carving in a marquee in the Miner’s Welfare car park.

In 8 months we recorded over 4,000 attendances by nearly 1,000 individuals from a village with 5,000 households. I developed a community steering group bringing together a range of ages and skills to guide the project and embed it in the community. Members of the group were given training to write press releases, and we generated positive press coverage for the village. I created simple folders of images which we updated regularly for them to share with their own groups, families and neighbours. These folders gradually became individual scrapbooks as the people collected press cuttings, newsletters and printed out photos from events and meetings. This generated a sense of ownership and enthusiasm amongst the team, and allowed them to motivate others in the village. 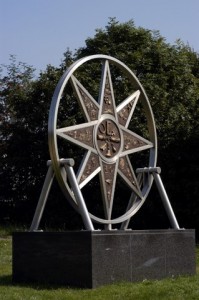